In addition to the initial launch, I invested into creation of a promotional video advertisement, highlighting some of the best films within its collection. I reached out to an online acquaintance of mine, musical producer LJOnDaTrack and asked if he’d be willing to create a musical background to accompany this ad. He did so, and nailed it grabbing both an old school hip-hop vibe, yet also Asian harp melodies. LJ teaches music software on a website Udemy, which is how I first encountered him. He’s solid, and I find it cool that he ‘teaches’, paying it forward so to speak. Nonetheless he’s a dope producer & I wish him well with things. With that said, while he’s a great teacher (I tried a few courses before his), I learned my way around the software FL Studio, I just don’t think music & beat making is really my forte.

In a similar fashion, voiceover work was narrated by TG of TG Gainey Productions. I’ve done & outsourced video work with TG, occasionally covering events or sporting games for each other. I actually didn’t know he did voiceover work until I saw him post a sample on his Facebook page about a year ago. Does it pretty well actually. Big thanks to the both of them for their professional services.

Going back to the channel, the name, aptly description, stems deep into where alot of martial arts popularity has risen with hip hop. Back in the day, 1980s let’s say, it wasn’t uncommon for people to not have cable TV yet. Maybe 50% (ballparking it). As such, often times one would go over an Aunt & Uncles house for a cousins birthday or christening, or a friends house on a rainy afternoon, and with only a few major network channels, there might be golf on one channel, Lakers/Celtics on another which your Uncles refused to watch. So people switched around up into the UHF channels (those higher than 13). It was here, where the bad English overdubs caught the allure of young America. The threats, the fighting, and the family. It taught us something, something internal. And while time moved on and we all got hundreds of additional channels to change to, it’s my belief that there’s a place for these films in our culture, and I launched it in hopes of reintroducing alot of these films back into the American publics view.

Getting it built was phase 1. Reaching potential viewers is phase 2.

So we ran a successful Facebook ad campaign to help push it. With Roku, channels can have surprisingly significant install numbers when in their “New & Notable” section, giving smaller/independent channel creators a much appreciated lift into channel viewership. Once that air was let out of the sails, I did a split testing of the ad with varied copy. In total, for a small $10 run, it received over 70 Likes and 25 Shares. The ‘shares’ especially seems like solid numbers, a testimant to the ad itself, LJ’s music, the interest in a channel like this, or the campaigns targeting metrics. Either way, it was a successful run and I have intentions of running it again in time.

Admittedly, channel creation and development is a massive undertaking. It’s laborious to code and develop, uploading all the content, both videos and creating logos and graphics, grabbing and copying video URL’s etc. My opinion is its a couple 40 hour workweeks to fully pull off from start to finish. And ad sales for streaming don’t pay much in the way of weeks worth of work. With that said, it’s a passion. For me at least. I’ve done it, twice now, and very happy with my results.

With that said, if you have a Roku device, please check out my ‘latest and greatest’, KungFu Saturday Afternoon Jawns! 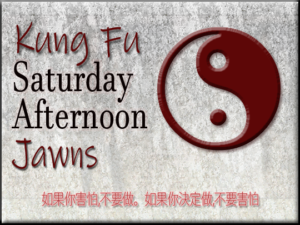