Youtube TV made a not so subtle announcement today revealing their $35 live TV channel lineup offering is now coming to Roku. Previously available on Chromecast, Sony Vue, and a few Smart TV platforms, the Beta testing is complete. Roku, the leading OTT streaming device, is a massive leap for what potentially could be the future of live television. 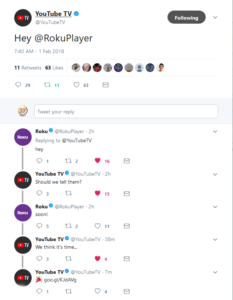 Youtube TV is a channel lineup offering similar to that of a cable TV package. However, it’s a much streamlined service, offering about 40+ channels, including local channels, AMC, FX, USA as well as live sports (ESPN and some regional sports channels). Gone are the 900+ channels of ad nauseam unnecessarily added onto skyrocketing cable costs. In addition, there is no cable box to hang onto, or pay $10/month to “rent” which, by the way is a scam in itself. “Renting” a cable box is like Redbox offering to “Rent” you a DVD or Blu-Ray player which, if you haven’t taken a trip to Best Buy recently can be purchased nowadays for about $30 and up, so I fail to see how cable box rates ever warranted such high monthly rates.

All that’s needed is an internet connection, and a device to watch it on. Currently those devices include:

with Apple TV rumored to be announced ‘soon’ as well. With included DVR capability, as well as an enhanced viewing experience with tailored Home Screen options, it separates itself from now seemingly archaic old school cable TV. It’s best selling point possibly being its flat fee, no boxes, equipment, or services to purchase (aside from add-on Pay channels such as Showtime). As a Philadelphia area resident myself local sports on regional channels has always been an issue, due to laws and supposed loopholes with concurrently offering channels to satellite providers. Regional sports however, do seem to be included in Youtube TV.

Drawbacks? It seems not all ‘regular’ and popular cable channels are included. CNN, TNT, Golf Channel are some examples. A current list of TV channels can be viewed here.  If you’re looking to make the switch or cut the cord be sure to check if channels or programs you really want of need are included. Having said that if you are a niche follower, let’s say you’re a fan of Yoga or MMA that you would like to continue to follow, Roku channels are great for having niche content provided. Gaia TV offers hours of Yoga content available for about $10/mo. A friend of mine recently posted about considering cutting the cord, and mentioned he’s a big fan of MMA. I checked and there too is a MMA channel, similarly priced, which probably offers deep insights and content into the sport. Specific TV shows, can be purchased as well, thru services like Fandango Now. I tested this service out with The Walking Dead. I purchased an entire season for a little under $40, which, for a season with about 20 episodes comes to about $2 episode. Ain’t bad. The episodes are released on a weekly basis concurrent with the show on AMC, and are commercial free, coming out to about 42 minutes an episode. For $2, I’ll take it comparing the price of a show vs a 2 hour movie in a theater. The only drawback I found was episodes were released the day after it aired on AMC, (ie Monday morning), which I only found a deterrent on days were big revelations or cliff hanger episodes were revealed, in cases such as character deaths or season ending cliffhanger storylines. I avoided news sites & water coolers on those Mondays. Still, the underlying result is I wouldn’t let 1 show stop me from considering making this switch.

Who knows, you might find more value in something else you really love. #GaiaTV.